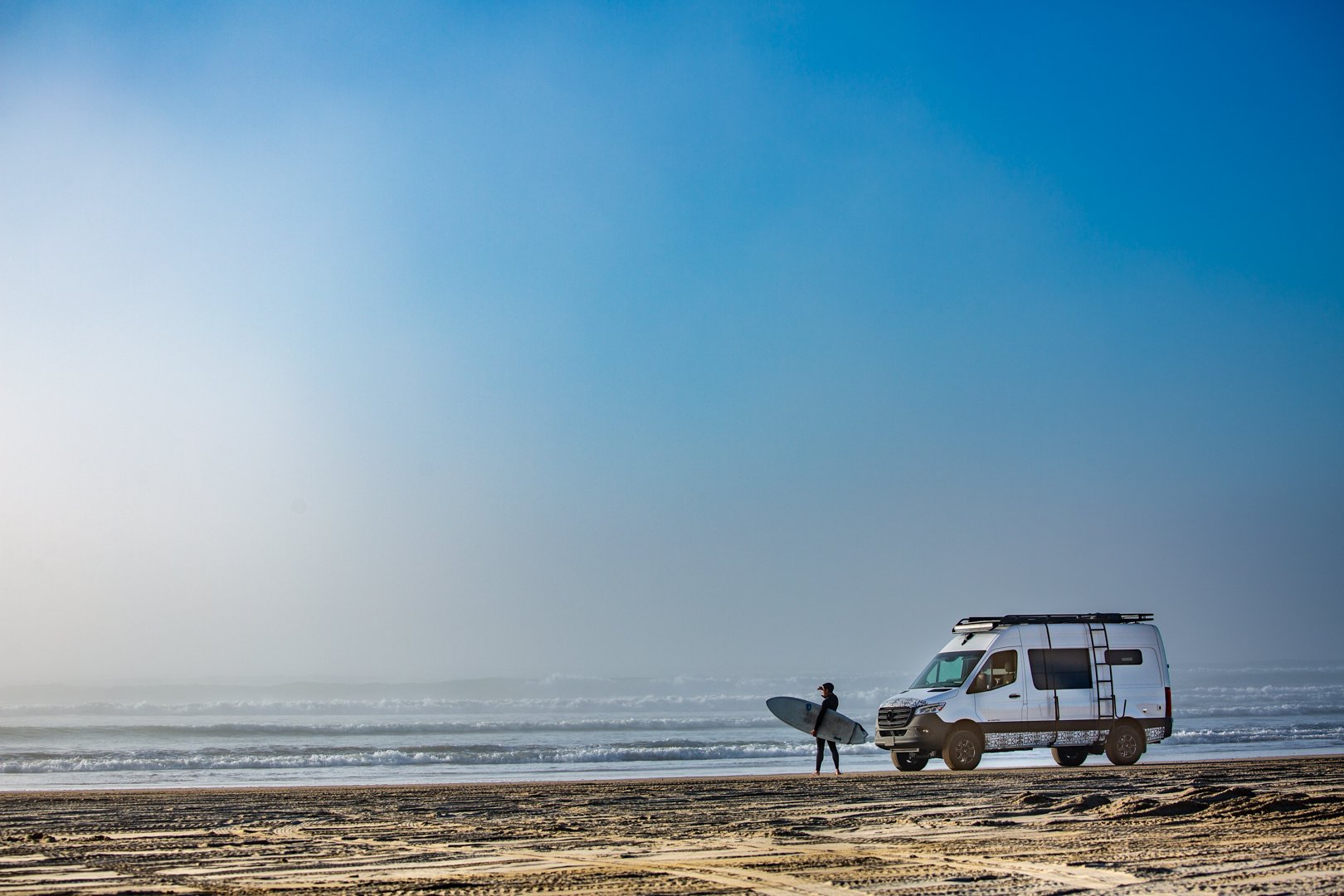 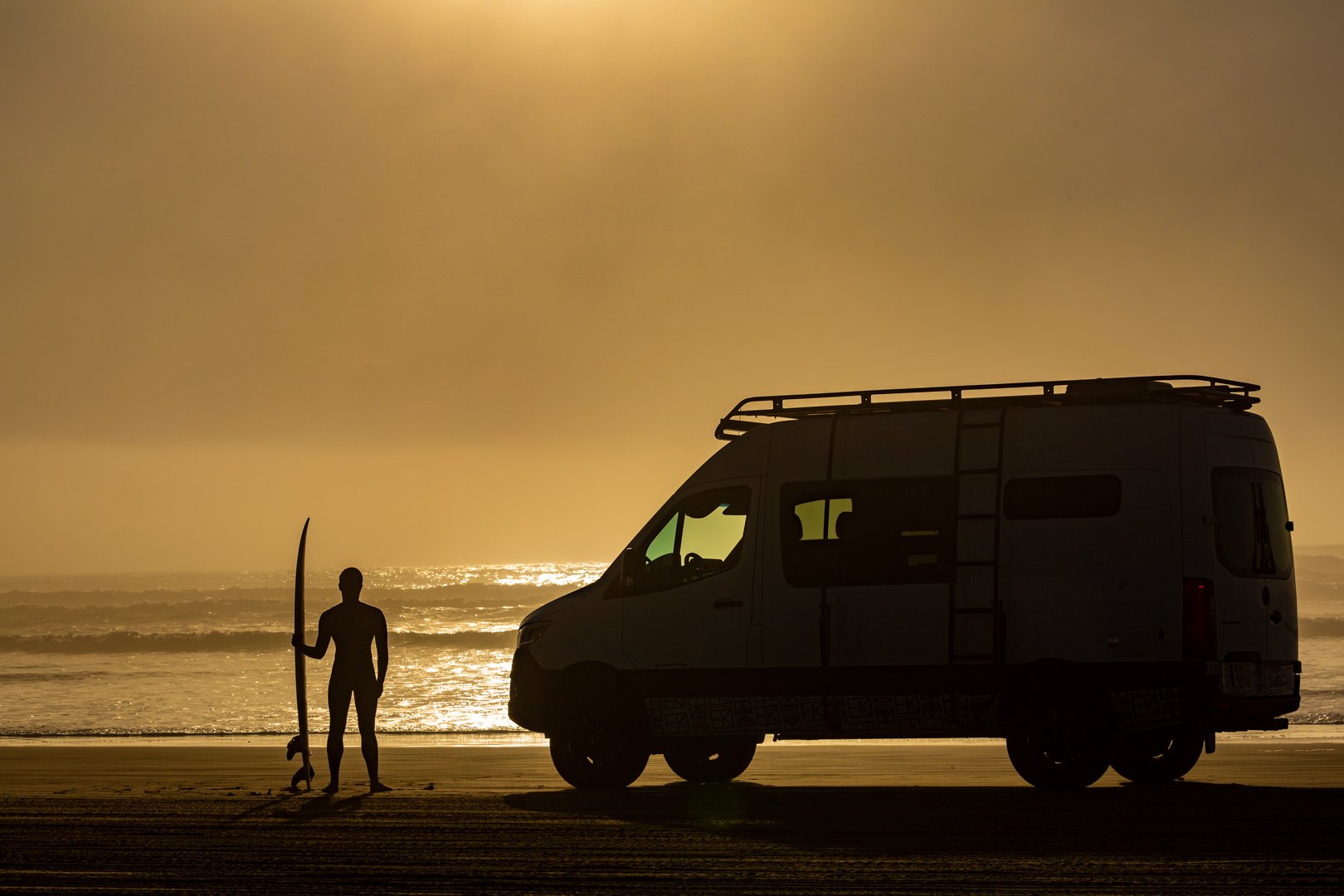 I received my first taste of van life all the way on the other side of the world. Australia, the Gold Coast. I cleared my schedule for a couple months and gave myself absolute freedom to just follow the road where it took me. I took off from LA and landed in Sydney bleary-eyed, not even sure what day it was. I rented a van from Wicked Campers and let the best waves lead my direction of travel. What came to be was an infinite flow of spontaneous life experiences, a true freedom and state of being that’s been hidden in plain sight behind the projected guises of corporate ambitions.

The moment I made that decision to keep connected to the road, I felt like I was tapping into a frequency underneath all the noise in the world. I didn’t have to feel trapped by the ambitions of a career. Underneath those unquestioned traditional expectations there lived this life of freedom that was mine the second I decided to take it. I just had to say yes. 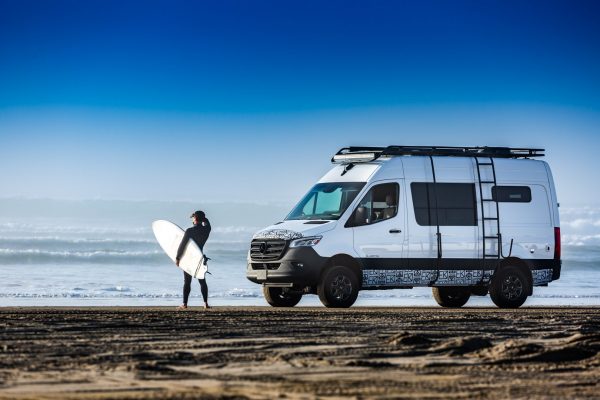 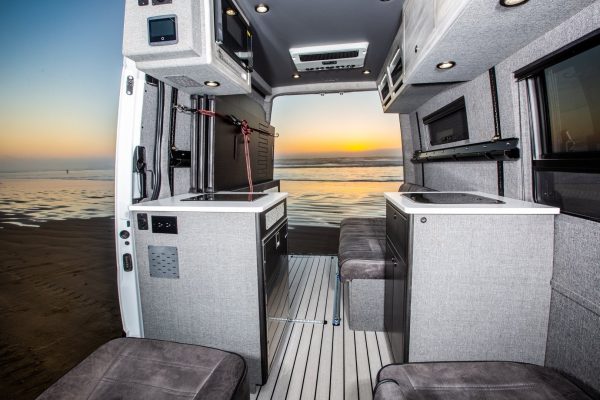 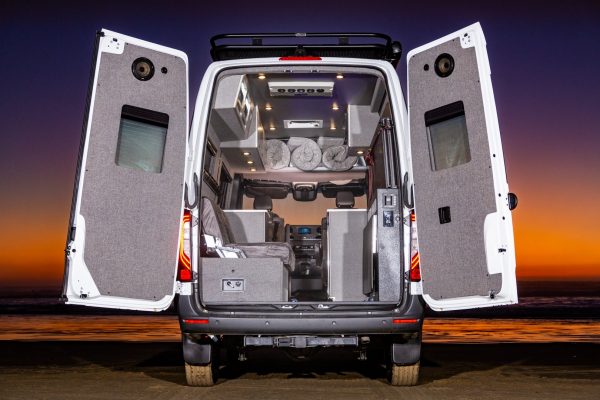 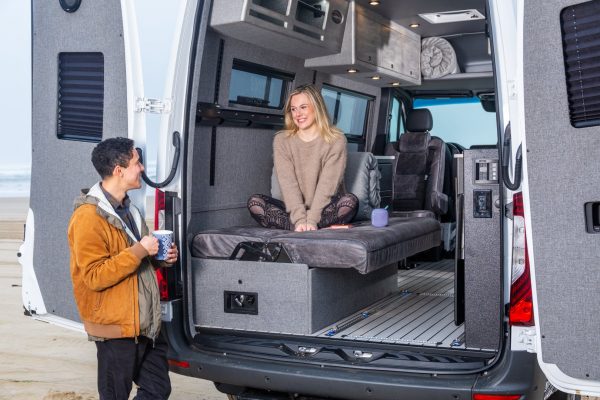 That trip has become a pivotal point in my new life. Even though I’d have to hand over those rented keys when I left Australia, I realized that I didn’t have to say goodbye to the freedom of following the road. Upon my return to California, I became obsessed with building my own camper van so that I could create more of these liberating experiences without having to fly across the globe.

Now back in LA, I reached out to the guys from El Kapitan to help me build my new ride from scratch. My rental van had her quirks, and after my time on the road I knew what I wanted. They listened intently as I told them about my experience in Australia and I knew they got the feel for what I was going for. They walked me through what was out there, and I was immediately stoked when they showed me their Story Maker series. It was a beautiful 4×4 Mercedes Sprinter van. Even before we started tricking her out, I just had a feeling that this was the right one for me.

“When you know, you know. This was going to be my story maker. ” 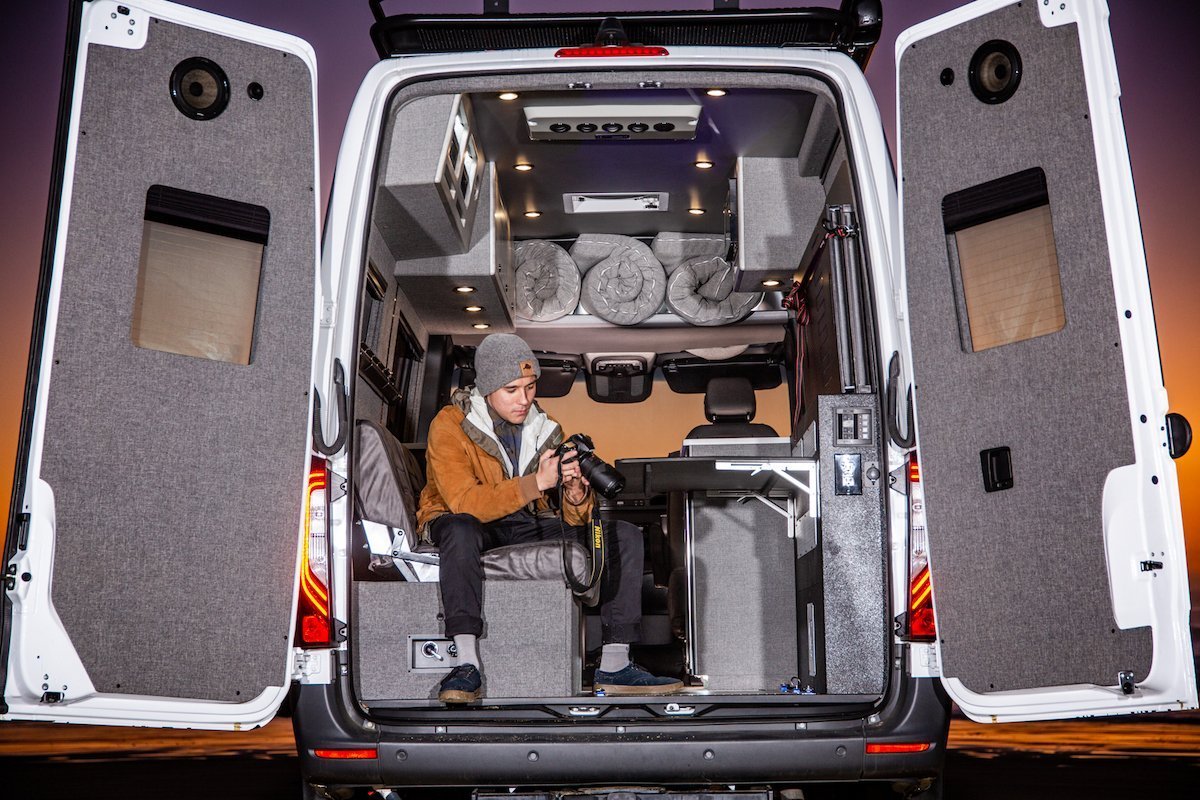 The further we customized that van, the more I felt like I was customizing my life. Every little thing I said yes to was a story I’d get to write, a detail that’d be a part of my new reality. From the swivel of my Captain seat where I’d navigate my adventures, to the fully upgraded sound-system that would provide the soundtrack to my new life, it was all mine. I gave myself the option of Hammock hooks and a large removable elevator bed system for the days I wanted to stretch out.

After diligently working with them in personalizing what has now been my own Story Maker for the past year, I’ve continuously dared to take full advantage of all the opportunities it has presented me with. Looking back at all the stories made from my initial escape in Australia, to the energy that compels me to now blog about it all, I’ve come to realize that this van of mine offers with time, an increasingly valuable and expanding piece of real estate that’s unbounded by the physical, mental, or spiritual borders that are abundantly found around my much more cash heavy home in Malibu.

As my home becomes a part of a reality extending beyond my house, into any city, beach, or place I’m feeling at the time, it took only a few seconds of thought when my girl and I decided one morning to pack up our surfboards and head up the coast to Pismo after seeing the swells they were getting. 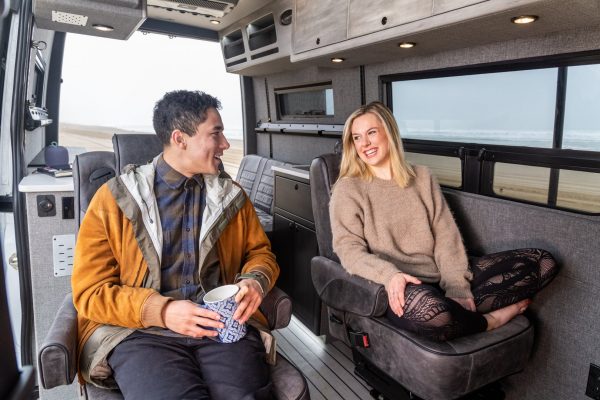 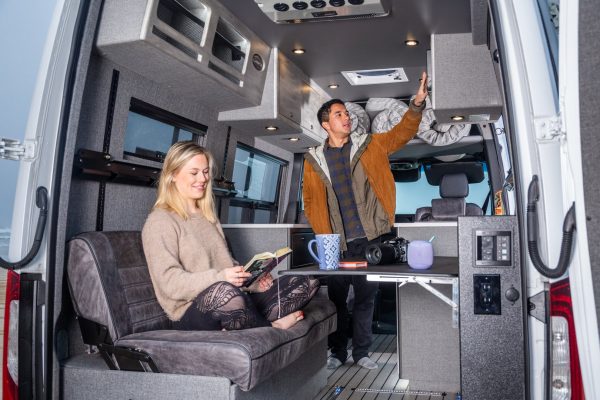 On the way out of LA we started the morning right; Stopped at Erewhon to scarf down a breakfast burrito, and stock up the van’s fridge with some sushi and IPA’s. Well fed, stocked up, and were off! Cruisin up the coast, sunken into the leather of my swivel driver seat, windows down, and making good use of the upgraded sound-system. The color of the sky on those clear days, and the way the light shimmers as I wind along Highway 1 is priceless. Way out in the distance, the dolphins are dancing about playing in the waves. We’ll join them soon.

The three hour cruise up the coast flew by in an instant. Before we knew it we were posted up at the break, and the appreciation for the music, sunshine, and dolphins had shifted over to the waves that could only ever be as epic as they are when you say “fuck it”, and drive however far.

We cracked open an IPA, grabbed some sushi from the fridge, and basked in the view of the waves that brought us there. Before heading out to the water, we had enough room to lounge in the van and change into our wetsuits as our boards had been tightly secured on the surf poles we picked up from Aluminess. 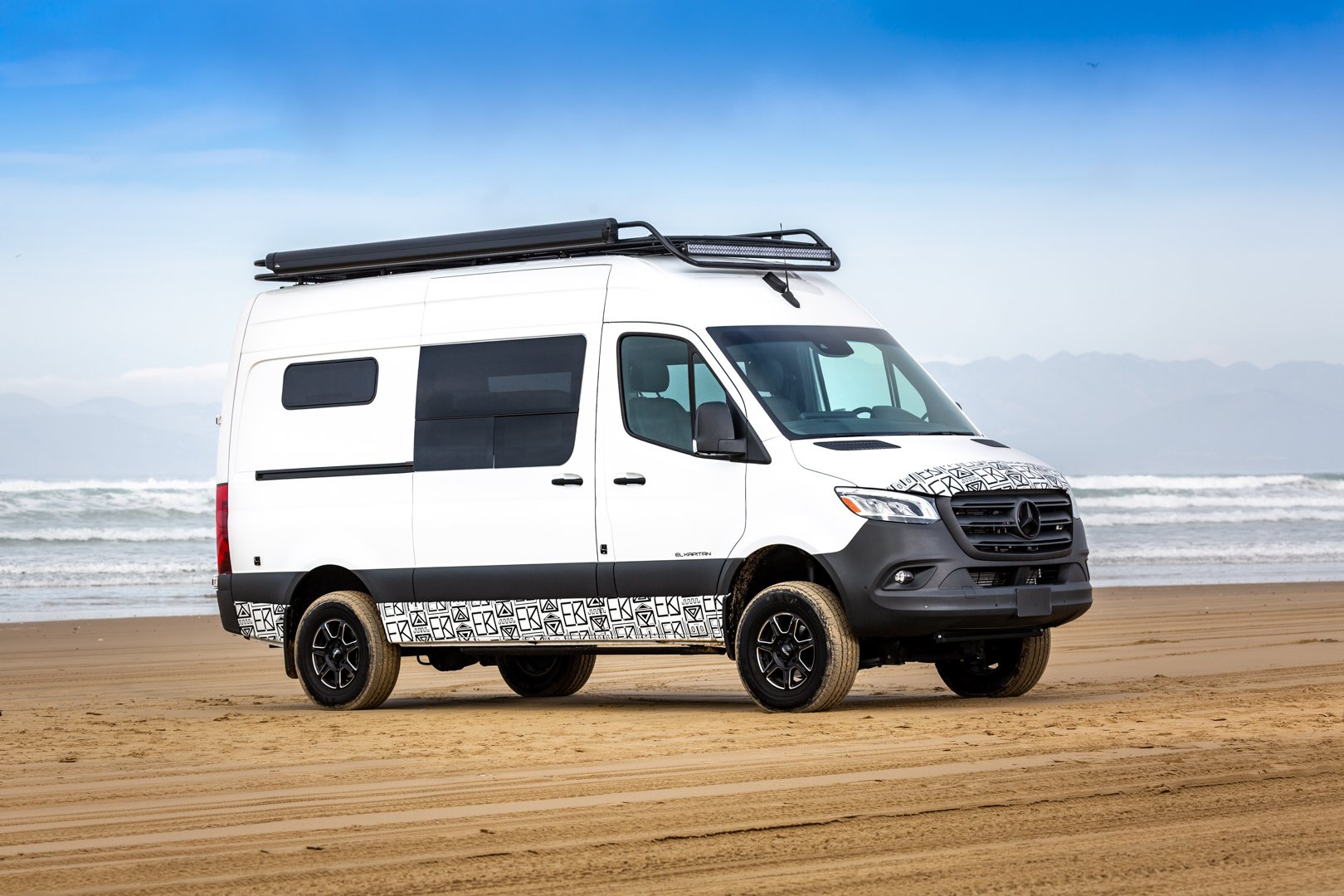 After spending the later half of the day surfing, we had remembered our previous visit to Pismo in which we had gotten stuck in the sand while using stock tires, as the beach terrain is more suited for an ATV. This time, we came prepared and we wanted to see how well our new all terrain tires would handle the soft sand.

We pulled right onto the beach and cruised along the tide with no trouble. All terrain tires now have proven to be another well spent upgrade to the ever evolving van. An upgrade that can only be realized through experience. I wonder what the next grade will be, what the next experience will be?

“The further we customized the van, the more I felt I was customizing my life.”

Contented with another satisfying adventure, we found a nice spot on the sand to post up and decompress. The onboard Webasto hot air heater runs off the diesel fuel and keeps us comfortable through the night. I open the back of the van and string up the hammock to the installed hooks, eat some sushi, enjoy the rest of the IPA’s, and make some new friends in the process.

We could head back down the coast to Malibu, yet mingling amongst the free spirits of Pismo Beach and enjoying a night out in the stars is just another reminder why I bought a Story Maker in the first place. We can keep tuned into that frequency underneath the noise. We say yes, again and again.